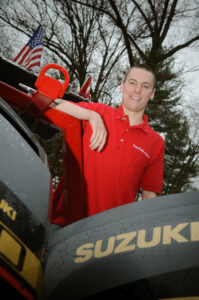 As long as he can remember, playing and working on the boats around Lake Wallenpaupack has been the biggest part of Kevin Trevor’s life.So when the time came to decide on a career path, he never considered pursuing anything other than what he loves doing.

Upon returning home from the Marine Mechanics Institute in Florida, Trevor discovered a nearby marina business had closed leaving hundreds of customers underserved. It was an ideal opportunity to put his education and experience to work so in 2009, the seeds were planted for New Wave in Recreation. Trevor’s parents, who have extensive industry experience, provided unconditional support and became his first two employees.

As the business blossomed, Trevor realized the current location was too small and moved into a larger facility. The entrepreneur also decided to look into MetroAction’s loan program for the financing he needed to sustain New Wave’s growth.

“The staff at MetroAction really understands the needs of small business owners, and shared my vision for New Wave’s continued success,” says Trevor, who borrowed $20,000 for working capital and inventory.

“I also attended MetroAction’s Small Business Institute where I learned about the importance of taking a step back from my day to day responsibilities and looking at the big picture of owning a business.”

With his dream of owning a marina business now a reality, the future looks promising for Trevor who recently became a franchisee of Boat U.S. offering fuel, repair, and towing discounts to members; the only one in the surrounding area.