Fidelity Bank Goes Green In More Ways Than One 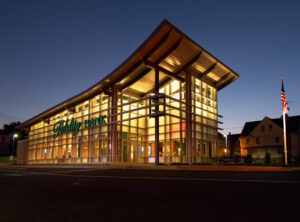 From the occupancy sensors to low-flow fixtures, it seems that Fidelity Bank has thought of everything when it comes to making its new West Scranton branch “green”.

“We’re constantly encouraging our customers to be economically responsible with their finances and by going green with our new building, this is our way of demonstrating our commitment to being economically and environmentally responsible,” says Dan Santaniello, Executive Vice President & Chief Operating Officer at Fidelity.

Scheduled to open in August 2008, the new branch will feature various eco-friendly features including:

Maybe the most striking green element is the building’s swooping, “cool roof”, made of silver and white metals which reflect sunlight instead of absorbing it. A cool roof like Fidelity’s dramatically cuts down on Urban Heat Island Effect, which causes the air temperature of the surrounding community to rise.

Designed by DxDempsey, Fidelity’s thirteenth branch is the first and only financial institution in the area built with so many environmentally sustainable components.

“We’ve really had a lot of fun with being green”, says Santaniello. “Our entire grand opening is being planned around Fidelity’s Great Green Giveaway theme. We’ll be giving away a brand new hybrid car, plasma TVs and more. Plus, we’ll have everything from pony rides and jugglers to professional document shredding, all free to the public.”